The developer’s dilemma: Rust or Go which is Better?

The developer’s dilemma: Rust or Go which is Better? 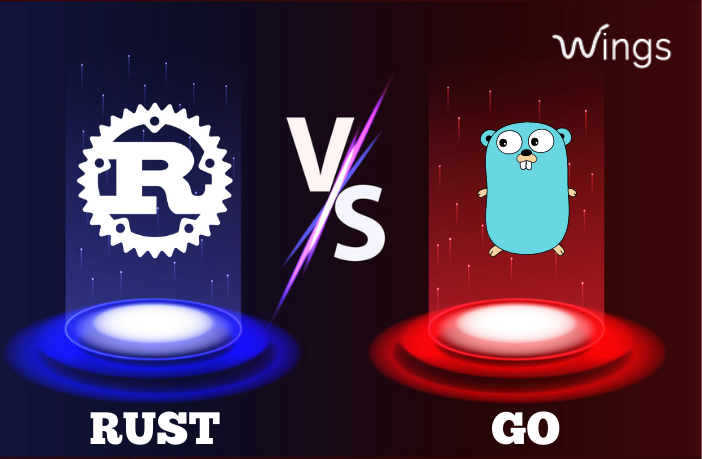 Should I Rust, or Should I Go

In a competitive world to thrive in, choosing the right programming language is the foremost thing. It is important for businesses as well as developers to provide a good experience to their users. The situation has become quite complicated for developers to study and choose one language over another to build reliable and intuitive applications.

With evolving algorithms every day, developers are heads over heels to compete with the steadfast changing processes. The newest languages in the tech basket are Go language – Google based multi-paradigm system programming language and Rust – multi-paradigm system programming language. Even though both have a few similarities, but they also have drastic differences between each other.

Let’s drive-in for both the languages, If you’re struggling to decide whether Go or Rust is a better language for your development needs, keep reading. In this blog, I will compare Go and Rust, explaining how they are similar, how they’re different, and what each can do for you.

Rust language was developed by Graydon Hoare in 2010. It is developed to maintain and preserve large-system integrity. It has been designed with an emphasis on control of memory layout, concurrency, and comparable idiomatic performance to C++. It guarantees the integrity of storage and has complete control over the lifecycle of memory. For improved parallelism and modularity, it lets you better write programs. The latest stable release of Rust is 1.48.0, which came on November 19, 2020.

Mozilla, Dropbox, Qiwi, Brilliant, Braintree, and many more are popular web development companies that have been created using Rust.

Go language was developed and designed by Robert Griesemer, Rob Pike, and Ken Thompson at Google in 2009, it is also known as Golang. It’s an open-source programming language that makes it easy to build simple, reliable, and efficient software. The developers’ goals can perhaps be summed up by saying simply that they wanted a language that offered the efficiency of C++ but that was easier to write, read and deploy in an optimized way on multi-core CPUs. The specifications of the Go language are dependency management, built-in concurrency, garbage collection, vigorous across multiple boundaries among the components, etc.

The latest stable release of Go is  1.15.4, which came on November 5, 2020. Golang is a compiler that successfully compiles the program and guarantees both type conversion and compatibility. This language will let you write code parallel to your own code so that it will become easy and straightforward to understand the code.

Rust Vs Go: Battle Round

In many ways, Go and Rust is similar. They’re both among the youngest programming languages to be widely used today. Now it’s time for a juxtaposition between these two nutshells.

The performance is one of the factors that can give you an idea for the comparison. The run speed of both languages Rust and Go are almost similar to C++ and C respectively. When it comes to a keen comparison,  While Rust’s performance is superior to Go, the former lags in the speed of compilation, where Go is fast. But, Go’s pace of development falls a few steps behind Rust’s high performance.

Through zero-cost abstraction, Rust uses the compile strategy for memory management. If there are any security issues in the Rust program, it will not be able to perform the compilation stage. Just like Rust, Go is also memory safe. But, for Go, this is handled automatically during the runtime, which sometimes causes issues. So, in terms of memory management, Rust is more reliable in comparison to Go.

At times, the development speed becomes more important than the program speed. Go in not the fastest language but to write software it is fastest. The compile speed of Rust is higher than Go because of more language features. If someone wants faster development, then he/she should opt for Go over Rust.

Modern-day apps are distributed and networked. The languages that haven’t planned for these realities are far off behind the curve. The developers have to be able to run the tasks independently and share state between the tasks minus the risk of data corruption. Go’s syntax comes with inbuilt concurrency, but the same is not the case with Rust. Despite the fact that the concurrency of Rust lacks.

We could keep digging into both the languages, dissecting both sides of the Go vs Rust comparison, but the ultimate answer to the Rust and Go comparison determined on the basis of development and business objectives. Even though the competition persists, each language has its own positive yet limited outcomes. There are instances where Rust is better than Go and vice versa. If you are looking to develop in any one language but you are confused about which one to pick, then just drop a line here and we will be back within 24hrs.