Battle of the Browsers: Microsoft Edge vs Chrome 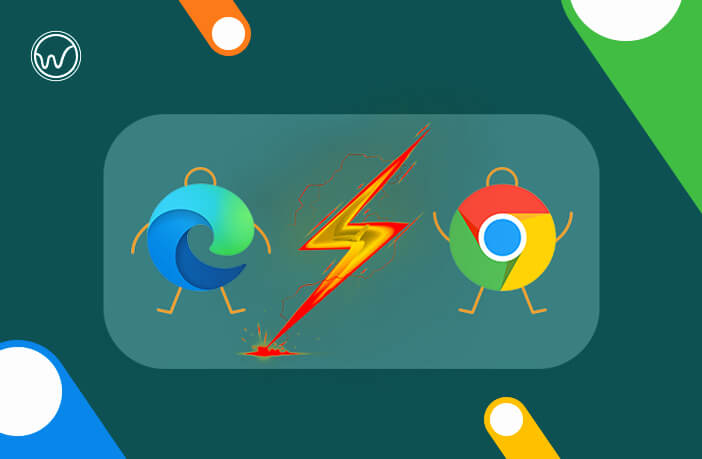 A battle royale between browsers has been raging in consumer technology for more than a decade. Each software release and iteration brings changes in the comparison between Chrome, Firefox, and Internet Explorer. There is no doubt that Microsoft Internet Explorer, especially in comparison with Google Chrome, is the slowest browser, but now there is Microsoft Edge.

Internet Explorer has departed the world of web browsers, leaving users with a different option for a browser. Although IE is set to end service on June 15, 2022, there are still plenty of alternatives available.

Chrome vs Microsoft Edge is a legitimate match-up since Edge was built on the Chromium platform in 2020, which completely changed the capabilities and performance of the browser.

In benchmarking tests, Chrome was faster at rendering loading pages than Edge. Yet Edge came in just ahead of Chrome.

Despite being a veteran, Chrome’s features keep it significantly ahead of Edge. Right now, Edge lacks some features, but its next upgrade may make it competitive with Chrome.

With Chrome’s high RAM demand, users are said to experience more secure browsing with fewer crashes that impede the experience. A large amount of RAM is used by multiple extensions. Despite having a 64-bit version of Chrome, Edge can consume enough memory to surpass it.

Though Edge consumes almost twice as much memory as Chrome when all the same tabs are open, Chrome surprisingly wins this round.

The evolution of Chrome, its rich content, and its regular updates enable it to stay current. The browser has a great deal of functionality thanks to add-ons, extensions, and a variety of web apps. Google Chrome offers several other features that make the browser the premier browser. As a result of Edge’s capabilities, users can do things like draw directly on a web page, integrate it with Cortana, and read using its reading mode.

With its feature-rich browser, Chrome keeps Edge far behind. The next Edge update may bring it closer to being as good as Chrome even though it lacks a few features right now.

Google Chrome is a user favorite due to its fast browsing speed and minimalist interface. The interface is minimalistic with the address/search bar along with the back, forward, and refresh options at the top and the bookmarks bar, which opens up several options. Microsoft seems to have taken note. It has a modern interface, unlike its prehistoric predecessor, and features a streamlined address/search bar similar to that of Chrome. Users will also benefit from the integration of Cortana into the browser.

Chrome is pushed out of the top spot for the best user experience by Microsoft Edge’s neoteric design and responsive user interface. Among the features that make this browser interesting are the reading view, Cortana, and hub.

The Chrome browser works with Android, Windows, OS X, iOS, and Chrome OS, while Edge is only compatible with Windows 10 and Windows 10 mobile.

The winner in this category is Google Chrome: it supports almost every operating system, and it syncs data across multiple devices.

This is where Google Chrome shines. You can protect yourself from phishing and malware attacks with Chrome’s Safe Browsing, Sandboxing, and Auto-Update features. Microsoft has pushed through and made Edge a very secure browser despite a less than stellar reputation when it comes to making secure internet browsers. Microsoft’s version of sandboxing is available in Edge’s ‘protected mode’. SmartScreen checks dubious websites for malicious content and blocks them from downloading it to your device.

There is no doubt that Microsoft Edge is the winner here, as it offers a full set of top-notch security features.

Considering that Google is a co-chair of the W3C Web Performance Working group, Chrome is always up-to-date with the latest web standards. Despite Chrome’s obvious advantage, Edge has been built to support modern web standards but not enough to be able to surpass Chrome in performance tests.

This isn’t a surprise as Chrome has won here. Microsoft Edge is just a baby and it will take a while before it competes with Chrome when it comes to web standards.

The Chrome vs. Edge comparison has come to a close. The management of each of these roles varies depending on how they are handled. For greater security and privacy, use the Microsoft Edge browser. The best application for performing various tasks is Google Chrome.

By no means do these results suggest Chrome is unable to outperform other browsers? Edge is a worthy competitor to Google Chrome, but it has not yet matured enough to dethrone Chrome. But that shouldn’t be a problem for Microsoft since Edge is still a baby- so Google should watch its back!

Chrome will remain King for the foreseeable future!

How would you rate Microsoft Edge versus Chrome? Tell us why you like one over the other.