Centralized Vs Blockchain: Which will get hall of fame? 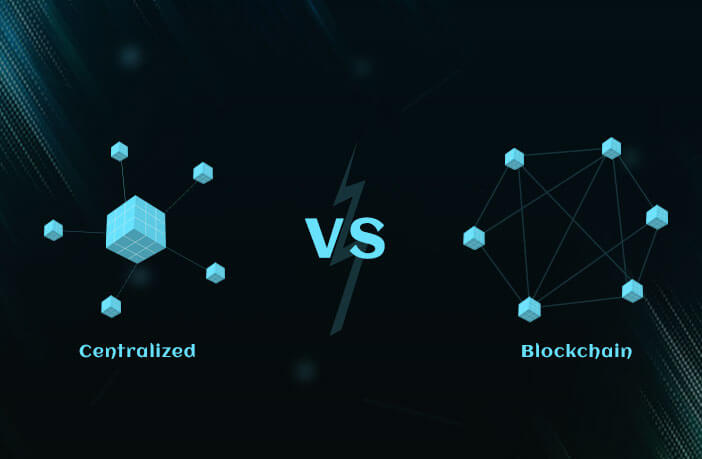 These days, there’s a lot of hype going on with Blockchains, and people can’t get enough of it. Blockchain is an enormous subject to oversee, and that is the reason you might get confused every time if you don’t have adequate knowledge about it. To make it more concrete, you should aware of the fundamental differences between blockchains and centralized systems. So, Let’s have a closer look at Blockchain vs Centralized database, to clear up all your misconceptions.

Let’s proceed ahead with it

Blockchain vs Centralized: The fundamental difference

Blockchain is a new concept of the database system that gives a new pace to traditional centralization procedures. It gives you the authority to share your confidential data directly with another person. In this distributed network of blockchain architecture, each participant within the network maintains, approves, and updates new entries.

The system is controlled not only by separate individuals but by everyone within the blockchain network. Each member ensures that all records and procedures are in order, which results in data validity and security.

This completely differs from the traditional database system which is mainly controlled by a central entity. You can make transactions over this system without any hassle.

But before making the final call, let’s see how well they perform in different sectors.

Let’s look over their performance on different parameters

Generally in this system, Blockchain has the All the nodes here are independent, which makes any amount of loss manageable. Even if a node or a few nodes fails, other nodes have the ledger updated and can go on without any problems.

So, if you send any kind of data over the system, there’s a possibility of zero transaction failures. It’s a great procedure where you’ll always get a way to catch up in case the node fails.

Others will use your public key to find you on the network. With the assistance of your private key, you’ll have the option to sign any activity or approve transactions associated with your public key. In short, every transaction will have a digital signature, public key, unique ID, and timestamp.

Standard databases don’t have this kind of fail-safe structure. That’s the reason there might be many transaction faults in the traditional system.

Usually, the contents of standard databases are stored on some kind of computer system where you can easily manipulate it. As a result, you’ll have to depend on the system. In this way, the system secures the data through higher-end cryptography.

Blockchains happen to discard these structures and secure the data through higher-end cryptography.

In the Blockchain System, every node has access to update the database. So, if any progressions are going on, they’ll update their ledger as needs are. But for the financial transaction, this much transparency wouldn’t be the most ideal approach. Standard centralized database systems avoid this kind of problem by restricting user freedom.

A centralized database allows read or write any data, but blockchain just allows Write the only option. That is the reason blockchain needs to include an additional layer of security to deal with this issue. However, using several blockchain addresses and cryptographies make this procedure substantially more tangled than usual!

Despite the fact that blockchains are nearly slower than centralized databases, still, the technology is new and encountering various changes to deal with the problems. There have been many cases where the system has been modified to work as fast as a centralized database.

However, validating the signature using private-public cryptography occupies a huge amount of time. As the nods will initiate the transaction between two entities, nobody can dump this procedure. Regardless, many cryptocurrencies use blockchain tech that works more rapidly than usual.

The difference between blockchain and centralized databases is tremendously huge. However, the Centralized system has been here for quite a long time and still exists with no issues. As blockchain is a new tech, it’ll take a bit more time to get used to. But when it overcomes all its imperfections, blockchain will ultimately revolutionize the way individuals and societies do transactions and deal with one another.