Which One Should You Opt for Android App Development? Kotlin or Java 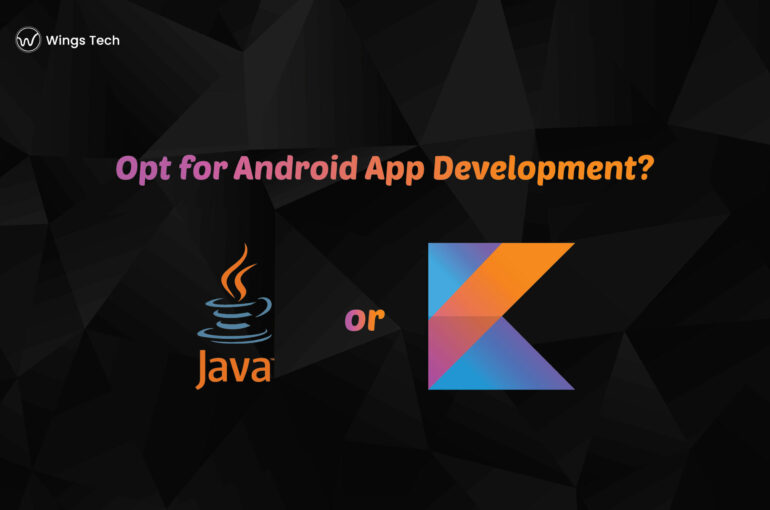 You’re considering developing an Android app. You know you need to use Java, but is Kotlin a better option?

First, Java is a more established language than Kotlin, and it has a larger community of developers and more resources available. Java also has a more rigorous syntax, which can be a downside for beginners.

Kotlin, on the other hand, is a newer language, but it’s quickly gaining traction thanks to its ease of use and powerful features. It’s also interoperable with Java, so you can use both languages in the same project.

Both Kotlin and Java are incredibly popular options for Android development, and there are pros and cons to both. In this article, we’ll explore the differences between Kotlin and Java and help you make the best decision for your project.

There are a few key factors to consider when choosing between Kotlin and Java for Android app development.

What Factors Should You Consider When Choosing Kotlin or Java?

When it comes to Kotlin or Java for Android app development, you have two main options. But which one should you choose?

Well, there are a few things you need to consider before making your decision. For starters, what is your level of experience with coding? If you’re familiar with Java, then Kotlin might be a good option for you, since it’s based on the Java language.

Another thing to keep in mind is the support that each language has. Java is currently being used by more developers than Kotlin, so if you need help or want to find a job in the Android development field, Java is the better choice.

But that doesn’t mean Kotlin is a bad language—it just hasn’t been around as long as Java, so the community might not be as big. However, the language is growing in popularity and is worth considering if you want to learn Android app development.

What Are the Advantages and Disadvantages of Each?

So, you’re considering using Kotlin or Java for your Android app development project? Here are the pros and cons of each:

– Pro: Kotlin is more concise than Java, which makes it a more efficient language to use.

– Pro: Kotlin is statically typed, which means that you’ll get compile-time errors if you make a mistake, as opposed to runtime errors. This makes your code more reliable.

– Con: Kotlin is a relatively new language, so there may not be as many developers who are familiar with it.

– Pro: Java is a well-established language that has been around for a long time. This means that there’s a large community of developers who are familiar with it.

– Pro: Java is more versatile than Kotlin, as it can be used for both desktop and web applications in addition to Android apps.

– Con: Java is less concise than Kotlin, meaning that your code will be longer and take up more space.

What Are the Most Popular Apps Written in Kotlin or Java?

So, you’re considering using Kotlin or Java for your next Android app development project. But which one should you choose?

Well, it depends on what you’re looking for. Kotlin has some features that Java doesn’t, like null-safety and extension functions. And Java is more established, so there’s a larger community of developers available to help you out if you run into any problems.

As for the most popular apps written in Kotlin or Java, that’s a tough question. But a few likely candidates would be Facebook, Twitter, Uber, and Airbnb.

Which Language Is More Beginner Friendly?

You might be wondering which language is more beginner-friendly- Kotlin or Java. The answer to that question depends on your skill level and experience.

If you’re a complete beginner, Java would be the better choice because the syntax is more straightforward. But if you have some experience with coding, Kotlin is the way to go. It’s based on Java, so you’ll find it easy to pick up, but it also offers some unique features that make development a breeze.

In the end, it’s up to you which language you choose. But no matter which one you choose, our team of experts will be there to help you out every step of the way.

How Easy Is It to Find Help When Developing in Kotlin or Java?

So you’re trying to decide whether to learn Java or Kotlin for Android app development. Both are great choices, but which one is going to be easier for you to find help with?

Well, Java is a pretty common language, so you’re going to have no trouble finding resources online or in your local community. But Kotlin is a newer language, and it’s still growing in popularity. So you might have a harder time finding people who can help you with your development projects.

But don’t let that scare you away from Kotlin. It’s a great language, and it’s worth learning. And the good news is that the Kotlin community is starting to grow, so you’re sure to find plenty of help when you need it.

What Are the Future Prospects for Each Language?

Let’s take a look at the prospects for each language. Java is a more established language, and it’s been around for a long time. It’s also more popular than Kotlin, so there are more resources available for Java developers.

But Kotlin is seeing rapid growth, and it’s been endorsed by Google. If you want to be on the cutting edge of Android app development, Kotlin is the way to go.

The bottom line is that Kotlin is a more concise, fun, and easy-to-use programming language than Java. If you are an experienced developer, you can create high-quality Android apps with Kotlin in a fraction of the time it would take to do so in Java.

But if you are just starting in Android app development, Java may be the better option for you since it is more widely used and supported. So, should you learn Kotlin?

If you are an experienced developer, Kotlin is worth learning. It can save you a lot of time and hassle when developing Android apps.